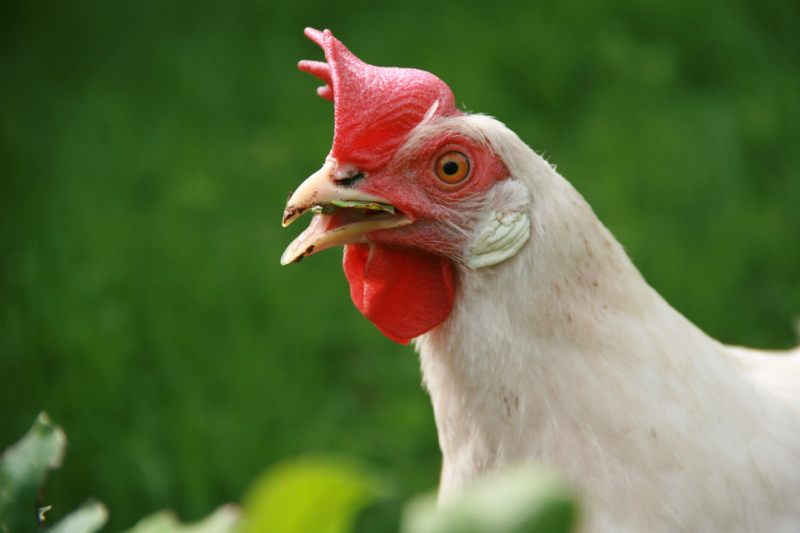 Peering through a sunlit barn in rural Kansas, fourth-generation poultry farmer Frank Reese rattles off names of chicken breeds that were once common – Barred Rock, Dark Brahma, Ancona, Rhode Island Red, Dark Cornish. He points to an elegant-looking bird perching on some nest boxes. The bird, a Rose Comb Leghorn, flies down and runs under a wooden pallet to get some privacy.

“There are only 50 left of that one,” Reese laments.

We don’t think of chickens in the same way we think about the panda or the Bengal tiger, but Reese argues that we should. Without these breeds, he explains, we may not be able to find our way back to a more humane way of farming. As a result of intensive breeding techniques aimed at profitability, virtually all chickens today suffer simply because they exist. The old bird breeds farmers like Reese preserve can provide the genetic material needed to correct these excesses.

Unlike the notoriously lethargic modern “broiler” chickens, Reese’s birds don’t sit still for long. These birds, known as standard-bred, are agile and constantly moving about. The contrast between a standard-bred chicken and an industrial breed could not be more dramatic, yet these athletic chickens are the ancestors of our modern dinner chicken. What went wrong and why?

By now, we are familiar with the story of farmers being prevented by Monsanto from saving seeds from one crop for a subsequent crop. It is viewed as piracy by Monsanto, and they have won a number of court cases affirming their position.

Like genetically modified corn or soy, our table chickens today have been redesigned from the genetics up to serve the purposes of industrial agriculture. As with GM crops, chicken genetics are controlled by a few companies. Significantly, the farmers who raise these chickens do not keep a few of the best for breeding for the next flock, as farmers had previously done. They can’t because today’s chickens are “dead-end” birds who do not produce commercially viable offspring. Instead, farmers return, flock after flock, to the same few companies that provided the day-old chicks to them.

Farmers don’t have much choice about where to get their birds. Eighty percent of all chicken produced globally — some 44 billion birds — come from one of three companies: Cobb-Vantress, Hubbard, and Ross. While these companies are fiercely competitive, the birds they market are almost identical in outcome, and all of them can suffer from profound welfare problems, most of them caused by fast growth.

Compared with standard-bred birds who take around 120 days to reach market weight, our table birds today reach the same weight (while eating less) in around 42 days. The industrial breeds of chicken have been selectively bred to grow so large so quickly that they can collapse under their own weight, have difficulty walking in the final weeks of their life, and have musculoskeletal, heart and lung problems. They are obese infants at slaughter age.

Even worse, the special “broiler breeders” who produce the billions of birds are so distorted that the birds are essentially incapable of feeling full. As a result, these birds must be put on restricted feeding regimes. This violates a basic tenant of good animal husbandry: giving an animal sufficient food. It not only produces great suffering — a state of chronic hunger — but its legality is questionable because the law requires that animals be provided with adequate food.

For these reasons, Compassion in World Farming, the leading international nonprofit addressing farmed animal welfare, has argued that the use of fast-growing broiler genotypes should be brought to an end. Newer farm animal groups such as Farm Forward are advocating for reinventing the poultry industry from the genetics up. Even animal groups such as the ASPCA that previously focused on companion animals have sounded the alarm.

At the end of this month, the global chicken industry will gather in Atlanta, GA, at the annual International Poultry Expo to discuss its future. Frank Reese will not attend. Yet it is birds like the ones he conserves that contain the genetic instructions for what good welfare once looked like and could look like again. Although the choices are few, the three industry giants do maintain a menu of genetics that includes improved, slower-growing breeds that results in less suffering. Replacing fast-growth industrial birds with these intermediate birds is a sensible first step forward.

As the industry gathers in Atlanta this month, their roadmap of the future must include a way back to a breed that does not inherently cause suffering.