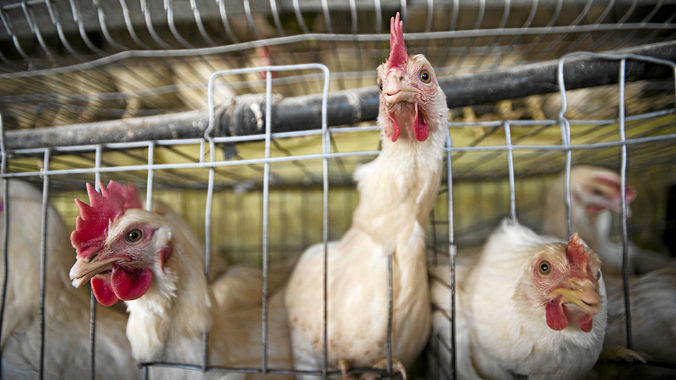 costs local jobs, but how you feel about it seems to depend on where in the food chain you are, writes Lloyd Gedye.

South Africans eat more than one billion chickens a year, which means that, on average, each one eats 35.8kg of chicken products, roughly equal to 27.5 chickens, or more than two chickens a month.

But how many South Africans are aware of how those chickens make their way to their plates?

This is the source of a serious dispute in South Africa’s poultry sector and the country’s chicken-producing giants are going to war to ­prevent imports taking over their market share.

Whether or not the imports are doing this is in dispute – it depends on whose argument you believe.

Ultimately, the dispute is framed as a choice between cheaper chicken for consumers versus protecting local jobs and food security.

Dumping duties
The South African Poultry Asso­ciation, which represents local producers, claims imported poultry products have increased by 40% year on year. If it continues, it will threaten the local industry and ultimately could result in massive job losses.

The association claims that, in 2011, 57% of all poultry imports came from Brazil – a massive increase that amounts to dumping, 9% from the Netherlands, 8% from Argentina, 6% from the United Kingdom and 5% from Canada.

It says because the United States and Europe face tough economic times their markets have shrunk and South American poultry producers are looking for other places to dump their excess.

The government agrees and the International Trade Administration Commission of South Africa has made a provisional decision to increase anti-dumping duties on two poultry categories from Brazil. It has placed an anti-dumping duty of 62.93% on whole chickens and 46.59% on boneless cuts from Brazil.

A final decision is expected within a month.

Imported products
The commission’s spokesperson, Thembinkosi Gamlashe, said an analysis of the information submitted and considered by the commission provided evidence that the local industry was being harmed by imports from Brazil.

“The protection is against unfairly traded imports and is not intended to stop fair competition from imported products,” Gamlashe said.

But the move has angered local importers and the Brazilian poultry sector and government.

The Association of Meat Importers and Exporters of South Africa has lodged a legal challenge to the decision and the Brazilian government has lodged a complaint with the World Trade Organisation.

The importers claim the figures the poultry association and the commission use have been inflated by more than half, a claim supported by the Brazilians.

The Brazilian foreign ministry has accused South Africa of not being “co-operative” and “unreasonable” and the Brazilian Poultry Association’s executive president, Francisco Turra, has reportedly said the move would “compromise” the Brics (Brazil, Russia, India, China and South Africa) partners’ “existing friendship”.

But Kevin Lovell, chief executive of the local poultry association, said the only Brazilian company that co-operated with the commission was found to be dumping poultry products.

Local poultry industry
South Africa’s poultry sector employs more than 48200 workers directly and 59700 indirectly. If the sector’s reliance on local maize and soya, the two major ingredients of poultry feed, is taken into account, a further 48500 workers can be factored in.

The poultry association claims that the equivalent of five million chickens are imported a week, whereas more than 18-million birds are slaughtered locally each week. The imports are costing the country 12900 jobs in the sector, it says.

David Wolpert, chief executive of the exporters and importers association, said there were “rogue” importers and his association was working with officials to stamp them out. But, Wolpert said, the local industry was not efficient and could not compete with the cheaper Brazilian imports.

The Competition Commission is involved in an investigation of breeding stock, broiler production and chicken feed in the local poultry industry.

The commission claims that companies in the sector have divided up the market by allocating regions and customers, colluded to charge higher prices – sometimes by as much as 25% – and tried to control where broiler breeders buy day-old chicks and poultry feed.

The investigation came to light when Pioneer Foods agreed to settle with the commission.

Astra Foods chief executive Chris Schutte said this week his company was also in the final stages of concluding a settlement with the commission.

Several experts on competition said the South African poultry sector was anti-competitive and had been for years. “They don’t like competition and now are asking for protection when they have to compete against cheaper imports from Brazil,” one said.

But Lovell said no poultry company had been “convicted”.

“Perhaps this will happen in the future, but the actions of individual companies do not mean that the industry is not functioning in a competitive environment,” he said.

Wolpert said the loser was the consumer, who had to pay more for chicken products.

Jack Searle, managing director of Supreme Poultry, said that between 64% and 72% of the total costs of raising poultry comprised chicken feed, which was the area in which the Brazilian farmers were beating the South Africans hands down. The climate conditions in Brazil allow for a double crop of soya and maize in a season.

“All we are asking for is a fair playground to compete in,” Schutte said.

Lovell said the poultry association believed that there were other countries besides Brazil that were dumping their excess produce in South Africa and the association would be submitting a number of dossiers on the matter in due course.

Illegal imports raise alarm in Africa
The illegal importing of poultry is becoming a big problem in Africa, according to members of the South African poultry sector.

They also claim that a practice known as “round tripping” is playing a role. Round tripping takes place when the original country of production is obscured by the importing process.

Concerns over this situation have been raised in many other African countries recently.

Last month, 14 tonnes of illegally imported Brazilian chicken were seized in Mozambique. The chicken, which had made its way from South Africa to Mozambique, was not fit for human consumption.

The Association of Meat Importers and Exporters of South Africa says it is working with officials to stamp out “rogue” importers.

Meanwhile, the Namibian ­government is in the process of passing regulations that will place tariffs on imported poultry ­products in a bid to protect its own fledgling industry.

But it would seem that, like the alleged threat that Brazil poses to South Africa’s poultry industry, members of the Southern African Development Community view South Africa in much the same light.

The New Vision newspaper in Uganda reported that poultry was being repackaged and sold as if it was produced in the country.

Uganda acts as a transit point for poultry products heading to South Sudan and the Democratic Republic of Congo.

As a result, the Poultry Association of Uganda has called for an increase in taxes on imported chicken.

But not everyone is supporting this call. New Vision quoted a local chicken farmer, Ofwono Opondo, who said that those seeking protection were exploiting farmers. They had created a monopoly and were fixing prices. – Lloyd Gedye

Lloyd Gedye is the Mail & Guardian‘s business and arts reporter.