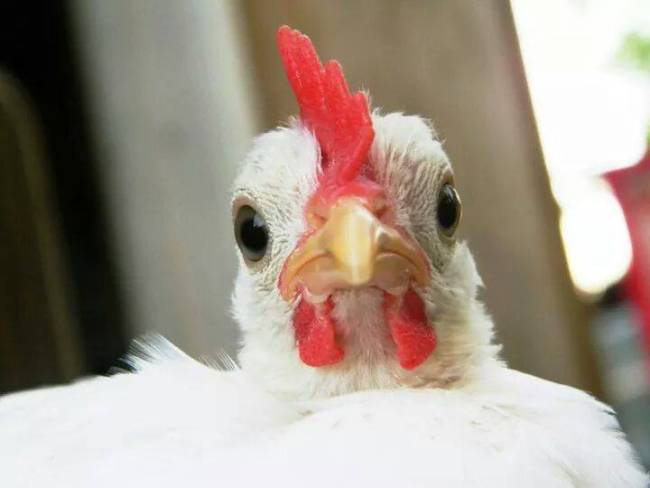 It’s strange how we pick up certain expressions. From the time I was a little kid, one of the worst forms of derision was to be called, “Chicken.” The quickest way to get a fight started was to use this name against a target of ridicule. The implication was always that a chicken was a coward, or lacking in courage. As a youngster, I never questioned the origins of the label nor did I challenge the idea that to be chicken was in some way inferior or otherwise lacking in desirable characteristics. That concept held until I had what intellectuals like to call a “paradigmshift,” an abrupt change in thinking.

Many people have never really known a chicken, I mean the feathered bird commonly found on farms, I have been fortunate to be around chickens much of my life and have formed a close bond with several.

One of the more memorable was Lisa, for she was responsible for one of my true paradigm shifts.

Lisa was a Japanese silky bantam. She was about half the size of the average barnyard hen, but big in her love for life as well as her indefatigable determination. Her feathers were snow-white, fluffy—almost fur-like—and perpetually disheveled. A patch of feathers perched atop her head like a comical crown. Her dark eyes sparkled with life and, as I later realized, a great depth of chicken wisdom. One aspect of her life, however, seemed to elude Lisa: motherhood. She laid eggs regularly, tiny bantam eggs not much larger than marbles. But her diminutive size put her at a great disadvantage with the other chickens, and the larger hens always crowded her out of the nests before the required twenty-one-day incubation period.

As the eggs hatched, the new mothers would introduce their brood to the world around them. Much to the dismay of the hens, Lisa would attempt to take over the duties of mother, even to the point of “chick-napping” the youngsters. As a result, she took a great deal of abuse from the other hens when they would eventually lose their patience and drive Lisa away with pecks and blows from their feet and wings. But Lisa would always return and, with a calculated display of casualness, inject herself back into the pastoral scene of family oneness. I felt compassion for Lisa, sensing how desperately she wanted to experience motherhood. I attempted to help her by making a nest away from the others. Lisa
readily accepted it and began laying eggs. However, I soon discovered the eggs broken and the contents eaten, either by a possum or a skunk. Another time the eggs simply disappeared, evidence that a snake had dined out.

Lisa began exhibiting signs of great distress. She erratically checked empty nests, unsuccessfully attempted to bully the larger hens, and clucked in a strange monotonous way. Realizing that something had to be done, I constructed a miniature chicken house, complete with all the amenities: food, water and a private nest that would be the envy of any chicken’s eye. The sides were covered with safety wire to keep out predators.

Lisa settled into her new house and immediately began depositing eggs in the nest at the rate of one a day until she had six. She then went into the “setting mode,” plucking feathers from her breast to line the nest and expose her warm, moist skin to the eggs. She assumed that patient air of waiting, sitting on her six precious eggs, clucking in a
no-nonsense tone that signaled a purpose in life. Finally, in the time prescribed by that universal clock, the eggs began to hatch. The baby chicks were unbelievably small. It was difficult to count them, for they seemed to disappear almost immediately into the fluffy feathers beneath Lisa’s wings and breast.

And never was a mother more devoted, more thrilled, or more suited to the task at hand. Lisa fairly glowed with the pride and joy of motherhood. I kept the little family in their confined space for a few days, reluctant to allow them out into the real world, filled with so much danger. Lisa pleaded with every motion of her body and every blink of her shining, dark eyes to take her new family out into the world, She paced back and forth at the door until I gave in and opened their lives to a world filled with green grass, the warm, moist earth, and more juicy bugs than most of us care to know about. Where I saw danger, Lisa saw only opportunity.

True to my expectations, Lisa was the ideal mother. She showed her little family the very best places to search for seeds and grain. She demonstrated the correct method of rolling and kicking in the dust to properly protect the skin and feathers against parasites. In and instant, she could turn from the coddling, soft mother into a screeching bundle of fury if perceived danger came within her circle of protection. From sunup to sundown, she was tireless in searching out the very best for her brood.

I felt quite good about the perfection of it all—the absolute order in God’s universe, the demonstration of life as it should be. I took pride in the care I had given in assisting God and Lisa in this rather difficult task. It was during one of those moments of reflection that I was shocked into a broader understanding of our true relationship with God’s creatures. As I stood one morning, looking out over the field beyond our kitchen window and absently watching the scattered groups of chickens going about their routine, I saw the entire community of chickens freeze. Every motion and every sound seemed to stop in “mid-cluck.” Whatever form of communication was used, it was instantaneous and
unquestioned. The total population of chickens scattered across the field reacted with one mind as a blur of feathered bodies dived beneath any available cover: wheelbarrows, woodpiles, bushes, and small trees. I knew this activity indicated the close presence of a hawk.

Then, something caught my eye.  It was Lisa! Snow-white, a standout in any field, she reacted instinctively as all the others had. All movement seemed to grind into slow motion. As if in a different dimension of time, I saw the sweep of a dark shadow streaking across the ground, on a direct line of convergence with Lisa. I saw the look of panic in Lisa’s dark eyes as she started to run for the overhang of the chicken house.

Suddenly the same thought struck us both. The babies! I vicariously lived the agonizing moment with Lisa as she broke stride and turned back to the six tiny chicks still pecking in the grass, oblivious in their infancy to the event happening around them. With one command from Lisa, the babies instantly rushed beneath her outstretched wings. Lisa settled in over them, flattening into the grass as much as possible. The look of panic was gone. I have tried to interpret the expression I saw come over her. Was it resignation? Perhaps surrender? Or was it releasing and putting the outcome into the hands of a higher power?

Into my field of view from the window came a brown bolt from the sky. The shadow and the patch of white blended almost instantaneously into one point. The hawk had struck with such force that an explosion of white erupted from the ground. Then with the grace and beauty of God’s creation and without breaking stride, the hawk continued on. A trail of with feathers fell from clutched talons as the hawk disappeared through the trees. It was over.

Stunned and amazed at the swiftness of change, I left the kitchen and headed for the point of impact, hoping that perhaps the babies had survived the hit. As I slowly and reluctantly walked toward the spot, I was impacted by the immensity of what I perceived to have happened. I had just witnessed a chicken perform a deed that would make headlines if the same act had been performed by a human. I had observed an individual make a truly life-and-death decision. Lisa had overcome the so-called survival instinct and, with precision of forethought, offered her life for another. The phrase entered my mind, “No greater love.”

Perhaps behind my thoughts was a lurking fear. Would I have measured up? Here was a creature that many educated and philosophic people have declared not only to have no soul, but to be without the capability of thinking or reasoning. Yet, Chicken, judged and found lacking by humans, had just performed the supreme heroic and selfless act.

I had just experienced a shift in consciousness. I had just observed that the courage and integrity of Chicken was unsurpassed and beyond reproach. I was humbled for myself and for my species.

I stood looking down at the pile of feathers in the grass and weeds. Leaning over, I gently probed for any of the tiny fragile chicks that might be in the grass. As I touched the mound of feathers, a startling and unexpected thing happened. The pile of feathers sprang to life, and an angry and nearly nude Lisa, with a ruffle of her few remaining
feathers, marched off with her family as if nothing had happened. The hawk had missed, apparently misjudging the depth and thickness of her protective coat just as I had!

As I watched Lisa and her chicks calmly continue with their routine of the day, I realized that I could never think of a chicken in the same way again. I now see them for the individuals that they are, and yet I feel the oneness that we all share. I was able to experience, if only for that split second of terror, a moment of total togetherness with Lisa. I was able to feel through Lisa a spiritual relationship with the Creator, that shining moment when we recognize our true potential and the spirit of God working in each of us.

Not everyone will have to make such a dramatic decision as Lisa. But at some point in our lives, we will all have an encounter with our hawk and we will each have a choice about how we face that hawk. I believe I was set an example, and I hope to confront any situation with the grace, dignity and confidence in God that I witnessed in Lisa.

I know now that I would be honored to be called Chicken.